The flight to Málaga was barely seven hours but I managed to view two movies, Antigone and Joker. Consequently, I was dog tired and really upset when I saw that the bottom of my bicycle box was torn to shreds. Thankfully, a good Samaritan with hockey tape helped me patch up the box and there was no missing pieces of my bike. Once outside, the weather was nice enough that I decided to set up my bicycle at the airport instead of taking a cab or a shuttle.

Setting up my bike took much more time than normal, probably due to my sleep deprivation. I took more than an hour to make 12 kilometres because I had to check my route on my GPS about a thousand times to avoid taking highways, many bits of bicycle paths cut off by construction and a few hills to make things more interesting. I was surprised by the diversity of the city where modern and old constructions are combined in way that looks very disorganized. My first impression was not good but I decided to stay an extra day to explore Málaga.

Following is a ‘Strava’ map to illustrate my trip from the airport to the Hotel and further below the pictures I took during my ride and a walk after checking in. 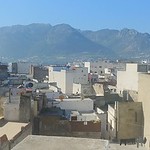 Online grocery shopping during the pandemic

Marc on a bike

Do NOT follow this link or you will be banned from the site!